The Real Juneteenth: A time to reflect on the impact of trauma on the mental health status of the African American community

Juneteenth commemorates June 19, 1865, when former slaves in Texas learned of the Emancipation Proclamation, meaning they were free. Please note the date: June 19, 1865, more than two and a half years after the Emancipation Proclamation was issued, six months after Congress passed the 13th Amendment abolishing slavery, and two months after Lee surrendered at Appomattox.

Juneteenth should be a day of reflection, of the lingering impact of trauma caused by slavery and continued institutional racism on the descendants of the enslaved. For example, the California Reducing Disparities Project (CRDP) found that depression is endemic in the African American communities.

Juneteenth (a portmanteau of June and nineteenth) is also known as Juneteenth National Independence Day, Freedom Day, Jubilee Day, Liberation Day, and Emancipation Day) is a holiday celebrating emancipation of African-Americans who had been enslaved in the United States. Originating in Galveston, Texas, it is now celebrated annually on June 19 throughout the United States, with increasing official recognition, becoming a federal holiday in 2021 (pending the widely-expected signing of a bill to that effect by President Joe Biden on the afternoon of June 17, 2021). It is commemorated on the anniversary date of the June 19, 1865, announcement of General Order No. 3 by Union Army General Gordon Granger, proclaiming freedom from slavery in Texas.

On June 19, 1865, about two months after the Confederate general Robert E. Lee surrendered at Appomattox, Va., Gordon Granger, a Union general, arrived in Galveston, Texas, to inform enslaved African-Americans of their freedom and that the Civil War had ended. General Granger’s announcement put into effect the Emancipation Proclamation, which had been issued more than two and a half years earlier on Jan. 1, 1863, by President Abraham Lincoln.

The holiday received its name by combining June and 19. The day is also sometimes called “Juneteenth Independence Day,” “Freedom Day” or “Emancipation Day.”

Previous efforts have failed to make it a national holiday, and few have fought harder for recognition than Opal Lee, an activist in Fort Worth who campaigns for the cause.

This year, it’s set to become the 11th holiday recognized by the federal government. The Senate on June 15 passed a bill to recognize the day, and the House approved the measure the next day. President Biden was expected to sign the bill into law on Thursday, immediately giving federal employees the day off this year.

In 1980, Texas became the first state to designate Juneteenth as a holiday, though the recognition is largely symbolic. Since then, at least 45 states and the District of Columbia have moved to officially recognize the day. Last October, Gov. Andrew Cuomo of New York and Gov. Ralph Northam of Virginia, both Democrats, signed into law legislation declaring Juneteenth holidays in their respective states. Last month, Gov. Jay Inslee of Washington, also a Democrat, declared Juneteenth a state holiday starting in 2022, and legislators in Illinois approved a bill that would make it a paid day off for all state employees and a school holiday. More recently, Gov. John Bel Edwards of Louisiana and Gov. Janet Mills of Maine, both Democrats, signed bills making the day a state holiday.

The Juneteenth flag is red, white, and blue, echoing the colors of the American flag, to symbolize that all former slaves and their descendants became American citizens under the law. The flag was revised in 2000 into the version we know today, according to the National Juneteenth Observation Foundation. Seven years later, the date “June 19, 1865” was added, commemorating the day that Union Army Maj. Gen. Gordon Granger rode into Galveston, Texas, and told enslaved African Americans of their emancipation.

For two decades now, communities around the country have held flag-raising ceremonies on Juneteenth in celebration of their freedom.

“This country has so many aspects to it that are spiritual, and I believe this flag is of that nature,” Haith said. “It (the idea for the design) just came through me.”

Designing the flag and its symbols was a deliberate process, Haith said. Here’s what each element of the flag represents.

The white star in the center of the flag has a dual meaning, Haith said.

For one, it represents Texas, the Lone Star State. It was in Galveston in 1865 where Union soldiers informed the country’s last remaining enslaved people that, under the Emancipation Proclamation issued two years earlier, they were free.

But the star also goes beyond Texas, representing the freedom of African Americans in all 50 states.

The bursting outline around the star is inspired by a nova, a term that astronomers use to mean a new star.

On the Juneteenth flag, this represents a new beginning for the African Americans of Galveston and throughout the land.

The curve that extends across the width of the flag represents a new horizon: the opportunities and promise that lay ahead for black Americans.

The red, white and blue represents the American flag, a reminder that slaves and their descendants were and are Americans.

June 19, 1865, represents the day that enslaved black people in Galveston, Texas, became Americans under the law.

And while African Americans today are still fighting for equality and justice, Haith said those colors symbolize the continuous commitment of people in the United States to do better — and to live up to the American ideal of liberty and justice for all. 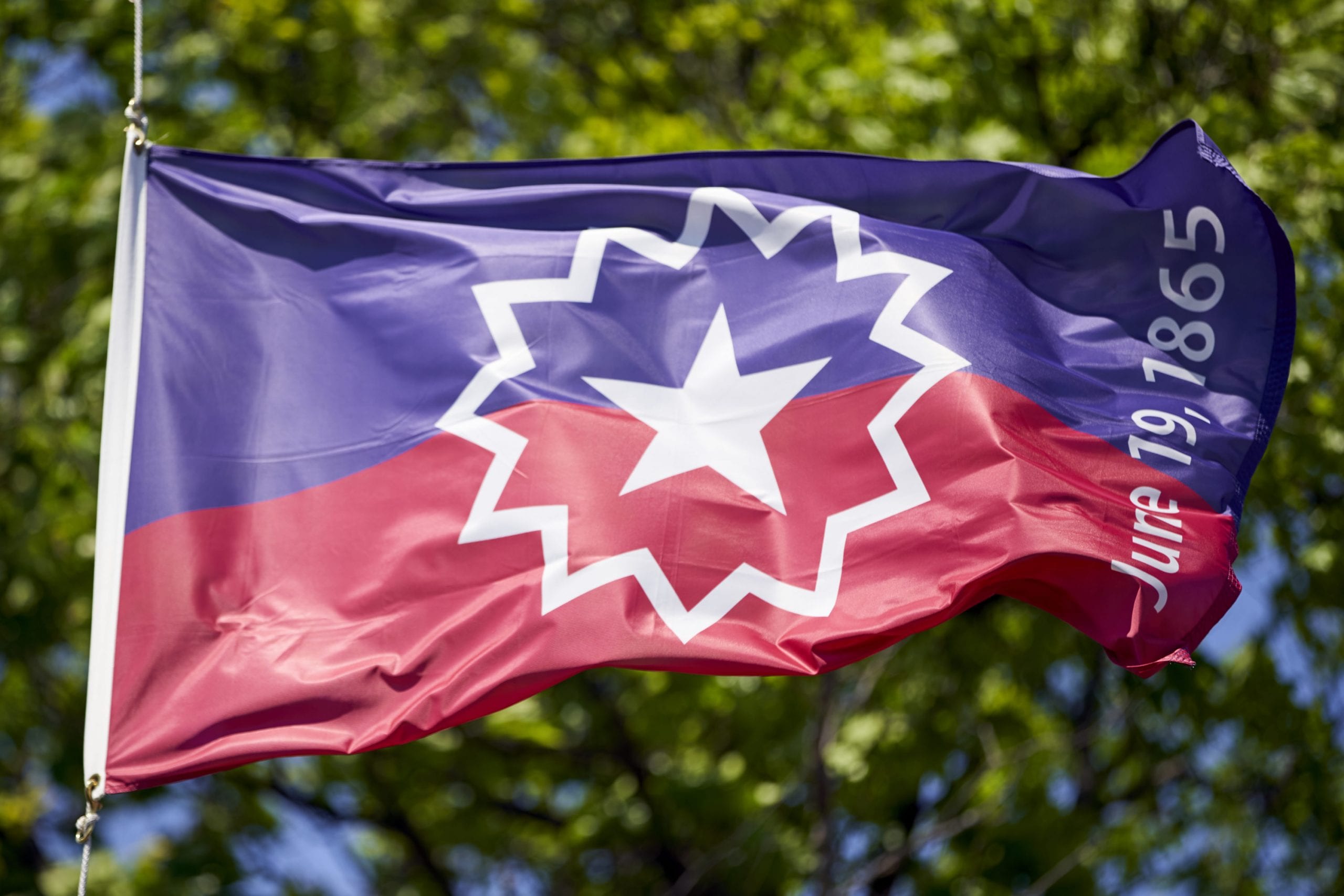 Juneteenth is an annual holiday observing the end of slavery in the U.S. and marks the day (June 19, 1865) when news of emancipation reached people in the deepest parts of the former Confederacy in Galveston, Texas – two years after the Emancipation Proclamation had been formally declared.

To celebrate Juneteenth and underscore our heartfelt understanding that Black Lives Matter, Overland IOP staff is taking time to reflect on the real and potential intersections of our mental health advocacy with antiracism.